That whacky world of TWA Flight Attendants. The general public could hardly imagine what is was like to spend half your life walking around at 37,000 feet, traveling from one exotic country to the next, shopping for perfume in Paris, Gucci bags in Rome, LLadros in Spain, jewelry in Egypt and custom designed fashions in Bombay. Staying at the finest hotels around the world, dining on continental cuisine. TWA Flight Attendants traveled the world like most people drive to their corner grocery store. Debriefing shares some memorable moments all written by TWA Flight Attendants. Just a glimpse into the world of of those crazy TWA skies. 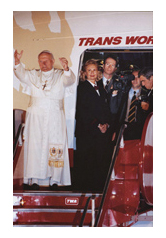 Travel With Angels, The Pope Charters with TWA

TWA had the distinct honor to be the U.S. official Papal Charter. In Jan. 27, 1999, Pope Paul I returned to Rome aboard a specially configured TWA 767-300, dubbed Shepard I for the trip. The flight was the fifth time TWA had the honor of carrying the Pope, and the fourth time it had carried Pope John Paul II and his entourage. Travel With Angels

Airline of the Stars

From the beginning flying has always been the choice of travel for the “rich and famous.” Often referred to as “The Airline of the Stars”, TWA made sure Hollywood celebrities received the true TWA red carpet treatment.Airline of the Stars 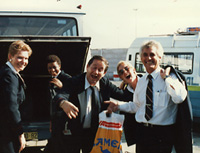 Debriefing - translation - crew code for party time!
After a long flight it was not uncommon to hear the magic word: debriefing in the Captains room! Debriefing 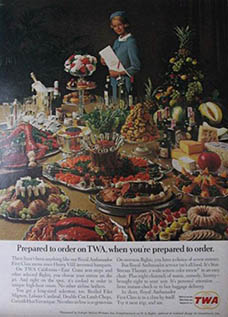 From the 1950’s through the mid 80’s TWA’s First Class dining service was call the Royal Ambassador Service. And Royal it was!

TWA spared no expense when preparing the finests in-flight cullinery taste treats. We managed to save some of TWA’s favorites recipes. Join us at the Ambassador Service site where fine dining is only a click away. “Bon appétit “ Royal Ambassador Service 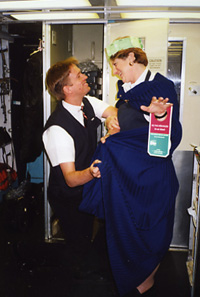